Review: Customary of Our Lady of Walsingham Daily Prayer for the Ordinariate 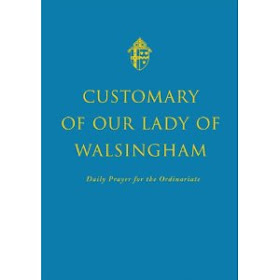 I have just received my copy of The Customary of Our Lady of Walsingham. Forms of the Divine Office are intended for the long haul and can only really be evaluated after long use. So it is probably much too early to review this new book from the Ordinariate in the UK.  Obviously the Customary has a very particular and rather small (at least so far) audience in view. However, Msgr. Andrew Burnham has said, "Our prayer is that the Customary will be a treasury not only for the Ordinariates but for the whole English-speaking world." It is hard to imagine any Anglicans who would not be delighted by some aspect or other of this new book of daily prayer. Actually I can imagine Anglicans who will not like any of it, because a particularly virulent strain of Romanophobia has infected many of us and made strange bedfellows of liberals, evangelicals, and hyphenated and qualified catholics.

For those Anglicans who realize that the future of the best in the Anglican Way may well be found outside the Anglican Communion there is much to love and respect in  The Customary of Our Lady of Walsingham. First, there is the use of traditional language and especially the Coverdale Psalter. We are told by evangelicals that the old Prayer Book language is not  'missional.' By liberals that it is not 'relevant.' By some Anglo-Catholics that it is not 'catholic enough.' All of which is a high recommendation of Cranmer's prose. Unlike in the American Anglican Usage Book of Divine Worship, which is a strange bit of homage to the 1979 BCP, there is one vernacular for the Ordinariate in the UK. That is a uniformity which would benefit all Anglicans who do not have it. It is one of the deep sources of Anglican unity in the past.

Secondly, this new book is simply the best (that I know of) compilation of readings from ancient English sources, the Caroline Divines, the Oxford Movement and more modern Catholic-minded Anglicans. The Customary gives some indication of the breadth of these readings:


1. The pre-Reformation sources, whether late patristic or medieval, are the work of writers who were in full communion with the Apostolic See.
2. The post-Reformation sources derive from both Catholic and Anglican writers: in the Catholic case, from either canonized saints (Fisher, More, Campion) or beati (Newman), and in the Anglican case, from writers who have been generally judged by competent commentators as representing a Catholic-minded stream in Anglican theology and spirituality.
These latter themselves fall into three groups:

Having said all that I still doubt that the Customary will replace the various forms of the Office now in use among Anglican clergy. For one thing you cannot use this book on its own; you will need a Bible and the Office of Readings from The Liturgy of the Hours in addition. The attraction of the LOH or the older Anglican breviaries is that you only need one book. There are a few hymns and they are very good but most Catholic Anglicans, if they use something other than the  BCP, would want a range of hymns for the whole liturgical year. The psalter has no antiphons, another factor which has driven Anglicans to more exotic forms of the daily office.

After many years of experimentation I have settled on the Canon Winfred Douglas Monastic Diurnal (according to the 1962 adaptations) for my office privately and The English Office for the public office in the parish. The only virtues these books have are 1) supplying what is lacking in the BCP and 2) I have stuck with them, perhaps the most important factor. But I am certain that The Customary of Our Lady of Walsingham will have an honored place in my daily spiritual reading. It is a fine book.